You are here: Home » Catalogue » Products » Contempt of Parliament 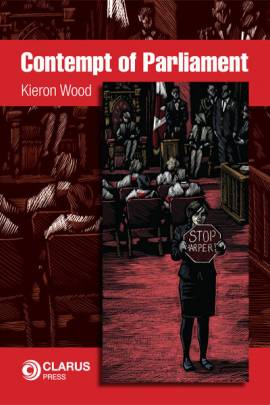 Considers the sort of actions that constitute contempt of Parliament.

Other Versions will be available shortly

Four centuries ago, when lawyer Edward Floyde insulted the King of England’s children, he was sentenced to ride backwards on a horse without a saddle across London, a ‘K’ was branded on his forehead and he was fined £5,000 and imprisoned for life.

This book, by Irish barrister Kieron Wood, looks at the long history of Parliamentary privilege, considers the sort of actions that constitute contempt of Parliament – from protests in the chamber to fights between Members – examines the rights of common law Parliaments to decide their own privileges, and scrutinises the punishments that may be imposed for contempt and the proposals for change.

Kieron Wood, barrister-at-law, is also an award-winning journalist and best-selling author.  His published books include The High Court – A User’s Guide, The Kilkenny Incest Case and Divorce in Ireland (as co-author).  His website is at www.irishbarrister.com.

Foreword by the former Speaker of the Canadian House of Commons, Peter Milliken

Be the first to review “Contempt of Parliament” Cancel reply