You are here: Home » Catalogue » Products » Social Media and the Criminal Law

Social Media and the Criminal Law 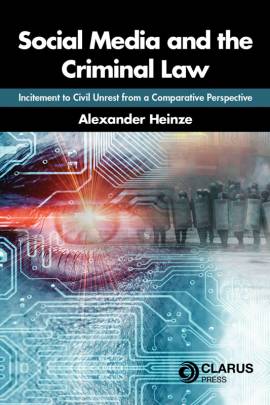 Social Media and the Criminal Law

The emergence of social media has opened new channels of mass communication and expression. It is possible to reach an unlimited audience with the click of a mouse or the use of a smartphone. However, due to the anonymity that social media affords, it has opened new avenues for perpetrators to threaten, intimidate and incite. Social Media and the Criminal Law will make a cross-jurisdictional assessment as to whether the existing law is adequate for dealing with criminal conduct committed on social media sites in a manner that is compatible with human rights legislation and case law. After defining the social media landscape, it both describes and analyses how social media expression was translated into criminal litigation. Since there is no “social media law”, the author assesses how, in selected Common and Civil law jurisdictions, laws traditionally governing particular types of expressive activity have converged in relation to criminal activity such as threats, hate speech, harassment, bullying, defamation, indecent images of children and terrorism.

This book’s main focus is social media expression that plans and incites crimes, civil unrest and violent public protest and how this expression receives constitutional or human rights protection. Do human rights instruments protect people’s messages, tweets, and Facebook posts that encourage an audience to protest? Can social media activity expose the average person to criminal liability when these protests turn violent? In an age where existing law can be seamlessly applied to new technologies and means of interaction, this book’s comparative law approach to criminal activity on social media provides a much-needed analysis.

PART A: SOCIAL MEDIA AND THE CRIMINAL LAW

Chapter 1: An Introduction into Computer Crimes

Chapter 2: Social Media as an Instrument to Commit Crimes

Chapter 6: The Use of Social Media to Commit Crimes

Part B: INCITEMENT TO CIVIL UNREST

Chapter 7: Social Media and Civil Unrest around the world

Chapter 8: Criminal Laws Governing Riots and the Incitement to Riots

Chapter 10: The Blurred Lines Between External and Internal Crowd Members Through the Use of Social Media

Alexander Heinze is a qualified lawyer and an Assistant Professor of law at the University of Göttingen School of Law. He holds a PhD in International Criminal Law, was awarded with the Trinity College Alumni scholarship and received his Magister in Utroque Jure (LL.M.) from Trinity College Dublin with distinction. His research and publications (in English, Spanish and German) deal with various aspects of comparative law, international criminal procedure, legal theory, philosophy and sociology of law, and include a book on International Criminal Procedure and Disclosure, for which he received several awards. Alexander Heinze is an elected member of the International Law Association Committee on Complementarity in International Criminal Law, book review editor of the Criminal Law Forum, has been working for the Appeals Chamber of the International Criminal Court as a visiting professional and was an expert of the Committee for Legal Affairs and Consumer Protection of the German Parliament in the public hearing of the draft law on the abolishment of s 103 of the German Criminal Code (defamation of organs and representatives of foreign states).

Social Media and the Criminal Law will be of great interest to the following: criminal lawyers, police, specialists in IT and cyber crime, criminologists, policy makers, legal academics, organisations dealing with online abuse, website operators and IT users.