You are here: Home » Catalogue » Products » Sport and the Law, Second Edition

Sport and the Law, Second Edition 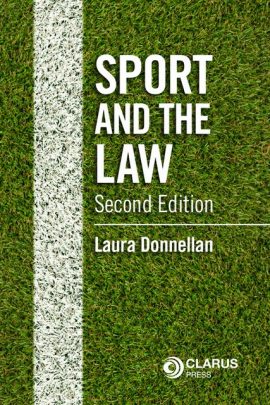 Sport and the Law, Second Edition

Documents the interaction between law and sport.

Sport and the Law, Second Edition is a full revised, expanded and updated since its first publication in 2010.

This book documents the interaction between law and sport. In recent years there has been an increased involvement of the law as it applies sport. The professionalisation and commercialisation of sport has brought with it a number of legal issues, from disputes arising from a contacts or sponsorship deals; or  doping allegations; or injuries sustained on the sports field.

The traditional approach to sports governing bodies has been to view them as autonomous and private associations and thus immune from the intervention of the law. This view does not reflect the reality. Sport is an industry which accounts for around three percent of the European Union’s (EU) Gross Domestic Product (GDP). A number of recent scandals at international level including, the International Association of Athletics Federations (IAAF) and corruption and extortion in the wake of widespread doping of Russian athletes and the Fédération Internationale de Football Association (FIFA) and the indictment of a number of officials on charges of racketeering and money-laundering. At a national level, the Olympic Council of Ireland (OCI) and its former President, Pat Hickey were the subject of a non-statutory inquiry following the incarceration of Hickey in a Rio prison for allegedly touting Irish allocation tickets. The Irish Athletic Boxing Association (IABA) and the resignation of Billy Walsh, the head coach of the high-performance unit culminated in a meeting of the Joint Committee on Transport and Communications. These scandals have highlighted the importance of good governance and as a corollary the need for public confidence to be restored. The law has a role to play, however, the extent of its involvement has been the subject of academic discourse.

Sport and the Law identifies the main legal concepts and draws on case law and legislation from Ireland and adopts a comparative methodology as it examines other jurisdictions including England and Wales, Canada and Australian. It covers topics including:

Chapter 2: Sports Law or Sport and the Law?

Chapter 7: The Law of Contract and Sport

Laura Donnellan teaches European Union Law and Sport and the Law at the University of Limerick. She has published in the areas of doping, the regulation of football agents, TV rights in Irish football, EU competition law, horse racing and animal welfare and animal welfare in the EU in particular on the Cat and Dog Fur Regulation and the Cosmetics’ Directive.  She has contributed opinion pieces to Sportsandtaxation.com, RTE Brainstorm, the Economics and Sport and the Asser International Sports Law blog. Laura is a Fellow at the Oxford Centre for Animals Ethics and a Consulting Editor for the Journal of Animal Ethics (published by the University of Illinois). Laura is currently an external examiner on the LLB programme for the Dublin Business School. She has co-written Sports Law in Ireland (with her colleague Dr Susan Leahy) published by Kluwer. The second edition of Sports Law in Ireland was published in 2016. Sport and the Law: A Concise Guide was published in 2010 by Blackhall Publishing.

Sport and the Law is intended for use by sports governing bodies, sports persons, coaches, referees, lawyers, and those studying sports or law related courses. It is also a useful source for those who have an interest in the interaction between sport and the law.

Be the first to review “Sport and the Law, Second Edition” Cancel reply