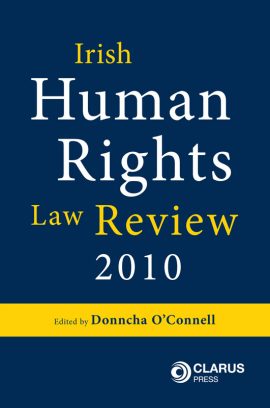 Focusing on the growing importance of Human Rights Law in Ireland.

The Irish Human Rights Law Review, to be published annually, will focus on the growing importance of Human Rights Law in Ireland. Each edition will feature articles by national and international experts as well as a substantial case note section with contributions from both legal practitioners and academics.

The Journal – the first of its kind – will be of interest to practitioners in the public and private sectors, academics and students.

Donncha O’Connell teaches Constitutional Law and European Human Rights at the Law School, NUI Galway where he was Dean of Law from 2005-2008. He is the Senior Irish member of FRALEX, the legal expert group that advises the EU Agency for Fundamental Right based in Vienna and is spending 2009-2010 as a Visiting Research Fellow at the Centre for the Study of Human Rights, LSE. From 1999-2002 Donncha was the first full-time Director of the Irish Council for Civil Liberties, a NGO founded in 1976 by Kader Asmal and Mary Robinson. In 2002 he was appointed as the Irish member of the EU Network of Independent Experts on Fundamental Rights. He is currently a member of the Board of Directors of the London-based NGO, INTERIGHTS – The International Centre for the Legal Protection of Human Rights, and has, in the past, been a board member of the Free Legal Advice Centres (FLAC) Ltd and Amnesty International Ireland. He is also on the Advisory Board of the Public Interest Law Alliance (PILA), a project of FLAC, and is chairperson of the Programme Forum of FOMACS, a collaborative public media project based in DIT.

Donncha co-edited (with Mike Milotte) five monographs in the Irish Academic Press series, Justice in Controversy, and writes and speaks extensively on public law and human rights issues. He is a member of the Board of Directors of Druid Theatre Company.